Majority of car owners struggling to cope with rising costs 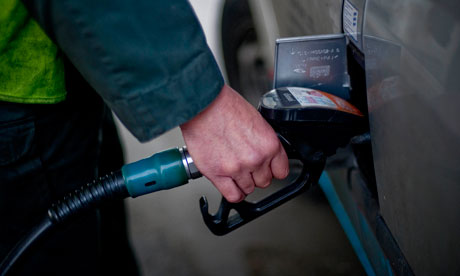 Motorists cite ever-increasing petrol costs as the main source of their frustrations. Photograph: Sarah Lee for the Guardian

Its latest survey found 75% of drivers were frustrated by the rising costs of owning a car, with nine out of 10 citing escalating prices of petrol as their main complaint. Another 71% were put off by the countless potholes and neverending roadworks plaguing local roads.

Many of those polled said they were leaving their cars at home as a result.

The online poll of 2,669 adult motorists found that four in 10 are cutting back on time spent on the road and looking to public transport (20%), walking (32%) or cycling (5%). Others looked elsewhere to trim costs, such as reducing their grocery bill or cancelling gym memberships.

Another 71% believe that government policies are not on their side, despite the postponement of a 3p-a-litre rise in fuel duty in June. Originally planned for August, the tax hike will now not be implemented until next January.

Phill Jones, Motors.co.uk’s commercial director, said: “Not only are drivers tired of the cost of driving, they’re exhausted by the state of the roads, maintenance of which has badly fallen by the wayside.

“The number of consumers cutting back on driving is frankly alarming, and it is imperative that both the government and the local councils do all they can to get Britain back on the roads.”

Petrol prices are moving upwards again after a 10-week slump. After bottoming out at 130.81p a litre on 1 July, average petrol prices at the pumps in the UK have rebounded to 133.12p a litre, according to the AA, which expects prices to climb even further over the next two or three years.

The average cost of motor insurance rose by 2.1% for the three months to the end of June, according to the AA Insurance Premium Index. Some insurers policies, however, are cutting prices to stay competitive.

In late 2011, a survey conducted by the AA found that 76% of its members were cutting back on car use, other spending, or a combination of the two. Its findings have also shown that the average costs of owning a medium-sized family car rose from £5,519 a year in 2011 to £5,983 a year currently, based on 10,000 miles of driving.

AA spokesman Luke Bosdet said that consumption is expected to continue to fall as petrol prices remain volatile. “It’s been going on for so long that it is now a mindset amongst drivers and businesses to reduce fuel consumption.”

Danny Connolly from east London, recently switched his golf club membership from Kent to one nearer his home to save on petrol. “At the end of the day, I couldn’t afford it,” he said. “It was costing me more for petrol than the golf membership.” The window cleaner, who makes three trips to the golf club a week, was spending £120 a month on petrol. His golf membership cost £100 a month.

Connolly, a divorcee who earns about £35,000 a year, has also cut down on the number of times he visits his children in Essex. “The cost can really add up. It’s insane,” he said.

Millie Plinston, an architect who lives in London, will be visiting her mother in Dorset by train next year. The train journey to Dorset and back, she said, costs £20. The same trip by car costs double that. “We use the car minimally,” said Plinston, who does not drive to work. “Next year, when my daughter is older, we’ll be travelling to Dorset by train instead.”