KAG Automotive Care, Bradford, was nominated for two awards being runner-up in the ‘Staff Special Recognition’ award , and winner of the ‘Top Performing Bodyshop’ award beating four other finalists to the prestigious,Innovation Group Award at the 2014 British Bodyshop Awards.

Joined by over 930 guests, from the across the accident repair industry including bodyshops, insurance and accident management companies, vehicle manufacturers plus automotive industry suppliers, the team from KAG received their award presented by James Gatti, Client Services Director – Motor, Innovation Group.

Celebrity Rob Brydon hosted this year’s awards, which saw bodyshops and individuals from across the UK being awarded for their contribution to the industry. With live entertainment from Motown act ‘How Sweet it is’, the British Bodyshop Awards has become an industry ‘must attend night of celebration’.

The British Bodyshop Awards is the vision of the AutoBody Professional Club’s (ABP) directors, Mark Bull and David Cresswell, both of whom have been in the industry for over 35 years. ABP Club chose to champion the annual awards ceremony as a way of celebrating and rewarding success in an industry that is often unrecognised by the general public, but is in fact instrumental in the safe repair of their vehicles following an accident.

Mark Bull, ABP Club Director said of the event:
“When we first thought of the concept of an industry awards night, we never expected it to attract so much interest from so many industry professionals. Our business prides itself on being the communication hub of the industry which includes bring people from across the industry together to network and share knowledge as well as celebrating success.
“The night itself was fantastic and it is great to see so many accident repair centres and individual employees get recognised and rewarded for giving excellent service to their customers; KAG is one such company and I’m delighted for them.”

Khalid Sheikh, Director of KAG adds:
“Being presented with the award from one of our largest customers, the Innovation Group is a genuine honour. The team at KAG work to extremely high standards and we’re delighted to be recognised for the outstanding effort our whole team makes. To be awarded in front of such a large audience also added to the occasion and I’d like to thank ABP Club for putting on such a tremendous industry event. I’d like to dedicate the award to Tari Sheikh, a much loved brother, son and father who sadly lost his courageous battle with cancer earlier this year at the age of 47.” 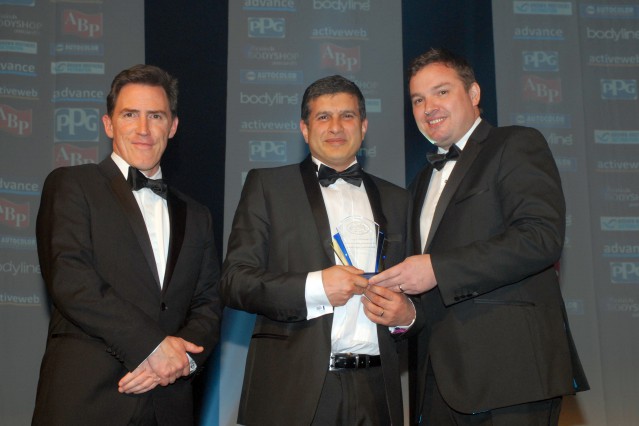 With over 30 awards being presented at the prestigious venue of Battersea Evolution, the event highlighted the standards in the car body repair industry and shone a spotlight on those working hard to maintain quality and high levels of customer service.

Our Location
Find Us