How Britain can make more ‘things’

Posted on: August 2nd, 2012 by Richard Raw No Comments

Now is not the time to panic, but for the private and public sector to invest long term in skills and – preferably green – technology 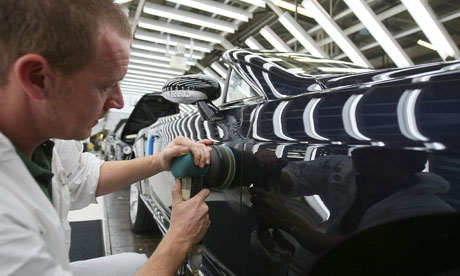 The finishing touches are added to a Bentley, one of the UK manufacturing brands enjoying an uplift in volumes. Photograph: Christopher Furlong/Getty Images

Data published today has shown that the manufacturing sector shrank at its fastest rate in more than three years in July. Naturally, this is disappointing news, but it is essential we keep our perspective: in 2010 and 2011, manufacturing grew 1.9% faster than the whole economy and the present contraction is much lighter (actually 75% less in scale) than the “great recession” that began in Q4 of 2008.

That should not mean complacency – rebalancing the economy so we make more “things” in Britain is absolutely critical to achieving long-term and sustainable economic growth – but explains why we shouldn’t panic. We need to be aware that confidence is critical to avoid the downturn spiralling into a self-fulfilling prophecy. The worst thing that could happen at this point is that industry stops investing in the technology and skills needed to drive innovation and growth in the UK.

Let’s be clear: in order to rebalance the economy, this country would need to achieve the biggest restructuring in a generation. It will not happen quickly or automatically, and co-ordinated action from the private sector and government is absolutely vital.

So far, I am largely positive about the UK’s plans and activities. But it’s too early to see the real effects – manufacturing generally has stalled because of the pressures of the sovereign debt crisis in Europe, and the marked slowdown in China. The latter exacerbates the problems on the continent because China is a key importer of goods made in Europe. Fiscal policy in the UK is also playing its part reducing demand, and lack of liquidity is still a critical issue for the British supply chain.

But while these are significant headwinds, they are not permanent and there is plenty to be optimistic about in the UK. Domestic demand is surprisingly good, retail sales are up 1.6% year-on-year, and lower inflation is a boost for our sector – and employment is up, which in turn will help boost demand.

We should also be proud that we have some great UK manufacturing brands, for example in car making, Jaguar Land Rover and Bentley – the latter up 30% on volumes in the first six months this year compared with last.

There are also endless opportunities from greening the economy: the renewable technology market will be of immense benefit to UK businesses. The government needs to stay consistent and supportive with subsidies and regulation and must be actively engaged in this market so we reap the benefits in terms of skills, R&D and inward investment and ultimately a strong supply chain capable of exporting in large numbers.

We are encouraging investment in modern and sustainable production technologies which make an important contribution to energy savings and improved productivity, boosting competitiveness – all essential for the growth of our manufacturing supply chain. Our investment in advanced manufacturing catapults – centres of excellence that bridge the gap between business, academia, research and government – are already becoming a great vehicle to support this.

We are supporting technical apprenticeships in higher numbers, which is encouraging, though we should accept that results will take time. Germany, which has been on this journey for decades, invests almost a third more than the UK manufacturing sector in capital plant machinery and automation. Our skills system is not yet up to the challenge of providing the labour required to support enough manufacturing growth in the UK.

We must work harder with the government in programmes encouraging R&D and innovation, in upskilling young people, creating more apprenticeships – so that our sector can grow but also so that we can play our role in reducing the number of young people – currently one million – unemployed in the UK.

From government we need policy consistency and a clear strategy for growth areas, such as offshore wind energy. We need stable policies to support manufacturing that chime with a long-term vision of how we want the UK economy to look not just in five years but 25 years too. I’m pleased that exactly this project has been begun by the coalition and I hope this will be realised into more than just a glossy report.

Action needs to be taken now to make the most of the economic recovery when it arrives. As a country we must invest more in skills and in technology to make our manufacturing sector world beating in terms of knowledge, innovation and productivity – underpinned by a consistent industrial and energy policy from government.

A failure to stay consistent with this action over the next two decades will cost the UK an incalculable amount in lost growth, jobs and opportunities.